How do you spell elearning?

Before I wrote this, I had preferred to use “elearning” without a hyphen, and “eLearning” for capitalization. But then I would find myself waffling back and forth, unsure if I was making the right decision. I had seen it used both ways, elearning and e-learning, but I was afraid of somehow making the wrong choice, or worse yet, being inconsistent.

This article is for those of you like me, fearful of the word “e” learning and in search of answers.

This is not an isolated issue either, whether you want to create an “e” book, send an “e” mail or sell via “e” commerce, you have to tackle “e” words eventually. While this article talks about “e” learning, the same grammatical principles can be applied to any “e” word.

So let’s work to unravel this puzzle together and see if there are any clear conclusions we can draw.

The first piece to unravel is whether the constructed word (“e” “learning” is a constructed word for electronic learning, similar to email and e-commerce) should or should not have a hyphen.

According to the Oxford dictionary, the term is “e-learning – learning conducted via electronic media, typically on the Internet” with a hyphen. In fact, the Chicago manual of style surmises that “e” terms should be “hyphenated except with proper nouns”. So that’s that, right?

But why do so many people say “elearning”? And along that same path, when’s the last time you wrote “e-mail” instead of “email”?

Traditionally, the term “e-mail” should have a hyphen, but today most people write “email”. According to Mary Morel from onlinegrammar.com, “Hyphens are often used when new words are invented out of existing words. These hyphens often then drop out over time. web site, web-site, website” The very same oxford dictionary from above lists e-mail as “email (also e-mail)”.

If that’s the case, then perhaps we should expect to see more and more people using the term “elearning” instead of “e-learning” and then the oxford dictionary will follow suit. According to Catherine Soanes on the Oxford Dictionary Blog, that’s exactly what happens!

“How do dictionary-makers decide whether noun compounds should be hyphenated or not? It’s not an arbitrary choice: for our current English dictionaries, such as the free one on this website, Oxford’s lexicographers assiduously check the evidence of billions of words of today’s English on a huge database, the Oxford English Corpus. If they see that in the vast majority of cases, a noun such as ice cream is written as an unhyphenated two-word form, then this is the spelling they will select to appear in the dictionary.”

So let’s look at some stats! First, let’s look at the number of Google search results for each term. Google reports 27.1 million hits for “elearning”, and 55.2 million for “e-learning”. More results with the hyphen, but if we look at Google search trends – 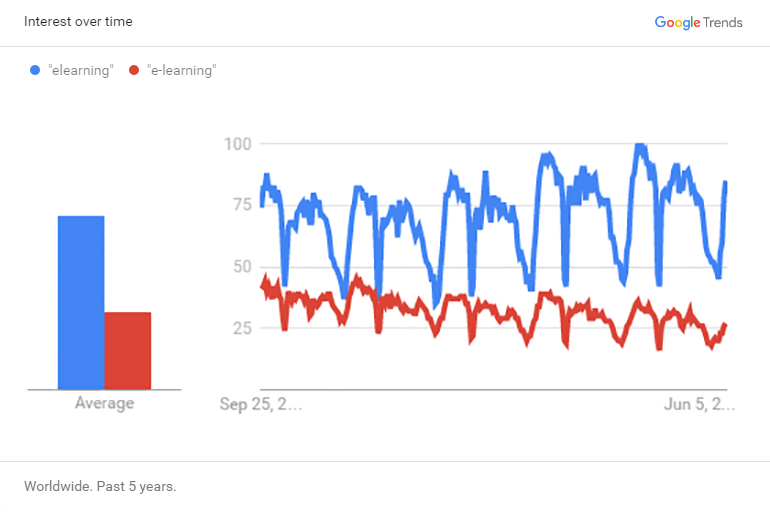 By a wide margin, there are more search queries for “elearning” without a hyphen. While this data is not conclusive, it seems that in the L&D industry we use “e-learning”, while those possibly outside the industry are searching for “elearning” far more.

Second, how to CAPITALIZE?

Now that we’ve discussed whether or not there should be a hyphen (we’ll call it a draw), let’s talk about how to capitalize the term.

First, how should “e-learning” with a hyphen be capitalized?

When starting a sentence, the first word alone receives capitalization, even with hyphenated e-constructions. E-learning starts a sentence.

Now the trouble comes when deciding upon capitalization rules for headers and titles, where each word is capitalized.

The Gregg Reference Manual (10 edition) says for hyphenated words “in a heading or title, capitalize all the elements except articles (a, an, and, the), short prepositions (at, by, for, in , of, off, on ,out , on , to, and up), and short conjunctions (and, as, but, if, or , and nor).” The e in e-learning refers to “electronic” and thus the title capitalization would be “E-Learning”

However, The Chicago Manual of Style states that “If the first element is merely a prefix or combining form that could not stand by itself as a word (anti, pre, etc.), do not capitalize the second element unless it is a proper noun or proper adjective.”. According to Chicago then, since the “e” cannot stand on it’s on as a prefix, the title capitalization would be “E-learning”. Yet, the Chicago style also gives freedom to “Break a rule when it doesn’t work”.

Finally, and from what I think is the most definitive source for this kind of thing, the Microsoft Manual of Style for Technical Publications states “capitalize the second word in compound words if it is a noun or proper adjective, it is an “e-word,” or the words have equal weight (E-Commerce, Cross-Reference, Pre-Microsoft Software, Read/Write Access, Run-Time).”

E-learning is also here to start the sentence.

Second, how should “elearning” without a hyphen by capitalized?

Earlier we decided that “elearning” is not technically correct (as of yet), so I don’t think we are going to find an answer on how to capitalize it unless we treat it like it is in fact correct.

The Chicago Style Guide says that “e” terms should be “hyphenated expect with proper nouns”. If we choose “elearning” then we are treating “learning” as a proper noun such as eBay. In that case The Chicago Manual of Style online says “for a proper name, we leave things alone: eBay is always eBay, even at the beginning of a sentence.”

eLearning then is the most logical capitalization in my opinion, whether at the start of a sentence or in a title. Furthermore, “ELearning” and “Elearning” read more like “EL earning”, confusing the brain, and are not the way you would capitalize a hyphenated proper noun.

At the end of the day, language is part convention and part artistry. How you decide to spell e-learning is as much a matter of style as grammar, but from the above research, I am ready to declare a winner.

What do you think? How do you spell “e” learning?

About the author: Marketing Coordinator for the US, Robert focuses on exploring and creating impactful material. He has a passion for researching and sharing L&D topics, with a particular interest in learning strategy, mobile technology and anything innovative that changes the way we think about learning.