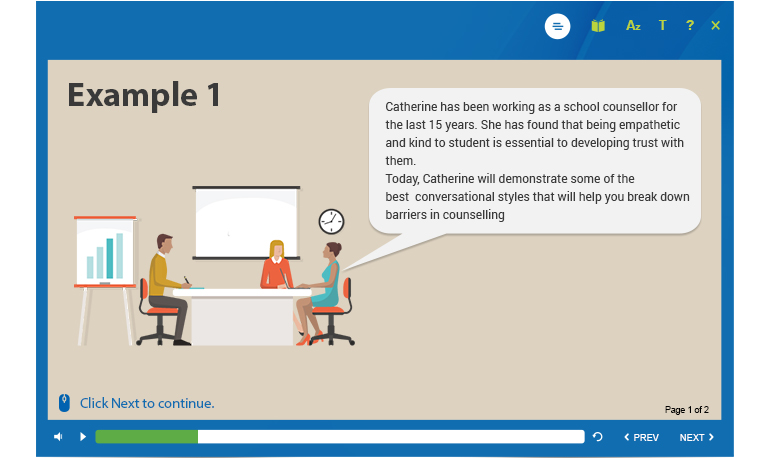 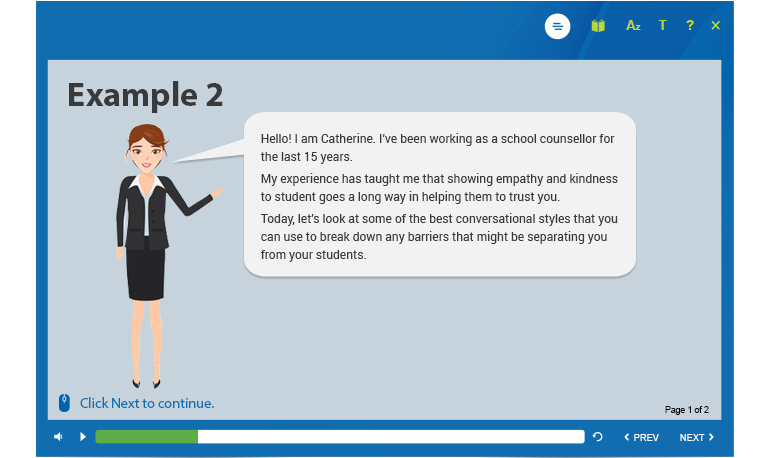 Which sample do you find more effective? For most of us, it is easier to relate to the second example. Why? Because it is in harmony with the personalization principle—it uses a conversational style, has an effective on-screen coach, and a visible author.

Let’s look at the significance of the second aspect of the personalization principle—using effective on-screen coaches or pedagogical agents.

How can you represent pedagogical agents in eLearning? You can represent them visually as cartoon-like characters, as a talking-head video, or as virtual reality avatars; and represent them verbally through machine-simulated voice, human recorded voice, or printed text. You can also represent them as real people using video and human voice or artiﬁcial characters using animation and computer-generated voice.

Why should you invest time and money to incorporate pedagogical agents into your elearning? Because if you don’t, your learning outcomes will suffer.

In another study (Atkinson, 2002), a group of students learned to solve proportionality word problems with the help of an on-screen agent who spoke to them, giving a step-by-step explanation for the solution. On a subsequent transfer test, these students generated 30 percent more correct solutions than the students who learned without an agent.

Hence, there is clear evidence suggesting that it is worthwhile to consider the role of animated pedagogical agents as aids to learning.

What makes an effective agent? Do people learn better from human-looking agents or cartoon-like agents?

Research suggests that a lifelike image is not always an essential component in an effective agent. There is not much of a difference in learning when a real character is used or a cartoon-like animated character. In addition, people learn just as well when the image of the character is present or absent, as long as they can hear the agent’s voice.

Agents Need Realistic Human-Like Behavior
Agents may not have to look real, but evidence does indicate that these agents should demonstrate human-like actions in terms of their gestures, movements, and eye-gaze. In a study by Lusk and Atkinson (2007), it was found that students learned better from an on-screen agent who used human-like locomotion, gestures, and eye-gazes rather than from an agent who was physically present but did not move, gesture, or gaze at the learner.

Agents have to Sound Conversational
An important factor that makes the agents effective is that they have to sound conversational. Various studies show that people learn better when:

About the author: Annu Paulose, a senior Instructional Designer for InfoPro Learning, has more than six years of experience in the field of ELearning. She received a Masters Degree in Industrial Psychology and valuable experience of teaching the same subject in graduate and pre-university levels before beginning her career as an ID. Annu finds her inspiration mainly through reading, especially works of fiction.